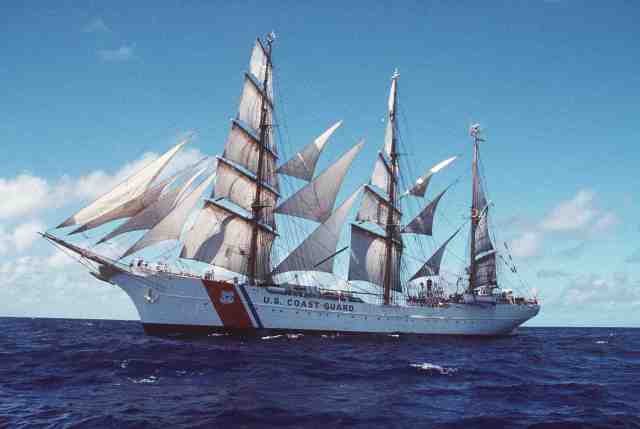 Originally christened the SSS Horst Wessel, the USCG Eagle was built in 1936 at the Blohm and Voss shipyard in Hamburg, Germany. She was the second hull of four in a new class of sail training vessels built with increased safety in mind. At the end of World War II, the four vessels then extant were distributed to various nations as war reparations. Horst Wessel was taken by the United States. She was first sent to Wilhelmshaven, Germany, then to Bremerhaven and was then commissioned into the United States Coast Guard as the Coast Guard Cutter Eagle on May 15, 1946. In June 1946 a U.S. Coast Guard crew, together with her German captain and crew who volunteered to train them, sailed the Eagle from Bremerhaven, through a hurricane, to Orangeburg, New York. The German crew was disembarked at Camp Shanks and the Eagle proceeded to her new home port of New London, Connecticut. 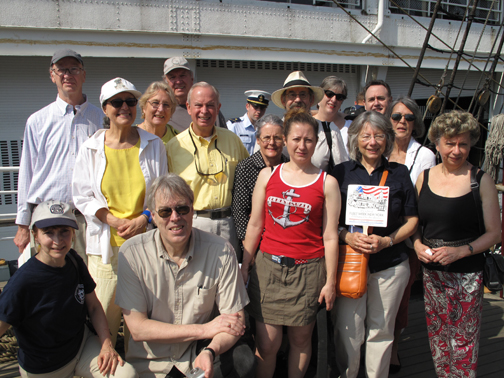 The U.S. Coast Guard, like the naval and merchant services of many other nations, continues to employ sailing school ships to train its future officers. It has long been recognized that even in an age of technological complexity, sail training still provides the best possible foundation for seamanship. The sea has not changed. It remains the same unforgiving environment that it always was, as capable of destroying a modern supertanker as it was of destroying the frail wooden sailing craft of an earlier era. Anyone who aspires to become a seaman must begin by acquiring a firsthand acquaintance with the relentless forces of wind and wave at sea. Only by starting with such an understanding can the sailor learn to recognize and respect both personal limits and those of the ship on which he or she must depend both for survival and the successful accomplishment of assigned missions.

Yet Eagle is more than a school for seamanship. She also provides an unparalleled opportunity for aspiring seagoing officers to develop confidence, courage and good judgment: precisely the qualities the Coast Guard needs in its leaders. If wind is the force that can drive the ship, it is human ingenuity that has developed the means to harness that force and it is the crew who must employ those means to make it happen. In Eagle, cadets are the crew. To sail the ship they must learn to work together as a team, to be decisive in circumstances that can be both frightening and physically demanding, to give and respond to commands quickly and clearly, and in the end, there can be few experiences as intensely satisfying as the successful accomplishment of a sailing evolution.

One comment on “May 28: SCNY Aboard the USCG Eagle”