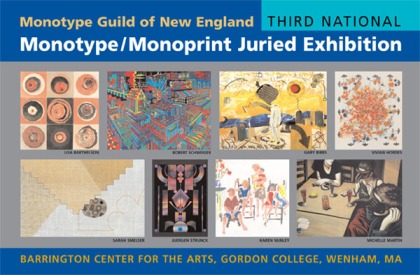 When one thinks of American Art and Cape Ann in northeastern Massachusetts, the initial images that come to mind are those of paintings that capture the rich maritime heritage of the area.  Towns with names like Gloucester, Rockport, Annisquam and Ipswich have been painted by many artists over the years, among them a great number of Salmagundians, the current author included.  Cape Ann also has a rich printmaking heritage that stretches back to the 1870s, and it is printmaking that is the focus of museum show now on view in that region.

The Barrington Center for the Arts located at Gordon College in Wenham, is currently the venue of a national juried monotype/monoprint exhibition organized by the Monotype Guild New England (MGNE) which opened on March 2nd.  Artists from 22 states are represented and the diversity of the 94 works selected is a glowing example of just how expressive the art of unique printmaking can be.  Juror Mark Pascale, Curator in the Department of Prints and Drawings at The Art Institute of Chicago, assembled the show from over 1.000 entries and was savvy enough to include our own monotype mavens Mr. Bob Pillsbury and Mr. Bob Mueller among them.  He even went so far as to give an award to the latter for his portrait of “Peter.”

While there was “some initial trepidation before receiving the entries,” Pascale noted, he was relieved that “their expansive approach made the process of selecting work for the show not only more interesting, but confirmed that there is a thriving community of contemporary printmakers dedicated to monotype and monoprint.”

In describing how he chose the winning prints, Pascale noted that his approach to these selections was to look for images that were powerful and direct with little extraneous content. Some of the images he chose for awards were simple and traditional in terms of technique, embodying the essential charming characteristics of monotype. Others utilized materials, layering and drawn elements in complex yet visually compelling ways.

MGNE is a non-profit organization founded in 1985 whose purpose is to foster understanding and appreciation of monotypes and monoprints. To this end, the guild sponsors exhibitions, workshops, demonstrations and other special programs for it’s members and the public.  MGNE is open to artists throughout the United States and there is no jurying requirement for membership.

MGNE’s 3rd National Juried Monotype and Monoprint Exhibition is on view through April 6, 2013. Gallery hours are Monday through Saturday 9 AM – 7 PM. Images can be seen online HERE.