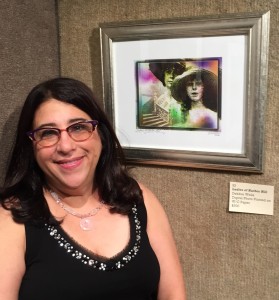 When I attended Parsons School of Design, I walked past the Salmagundi Club thousands of times. I saw the name on the plaque and wondering what Salmagundi meant. I didn’t give it too much thought at the time because I was already mesmerized by the sights of the city in a way that only an art student can appreciate. Walking the streets of Greenwich Village every day made me realize how important my dreams of becoming an artist truly were. As a child growing up in Brooklyn, Manhattan felt like a faraway Land of Oz to me. It was a huge step to cross the river and experience New York City as a teen and young adult. Even now, the creative atmosphere of the Village is where I feel most at home.

By the time I graduated in 1983, I still had no idea what Salmagundi was all about because I was afraid to go ever inside to find out. For four years, I lived in the Village – first the West Village on the inexplicable intersection of 4th Street and 12th Street and then in the East Village across from the iconic Tower Records. Salmagundi was not on my radar at that time either.

As I pursued my career in corporate graphic design, got married and moved to Long Island and started a family, I always felt a pull to Greenwich Village. There is no place like it in the world. It possesses an energy there that cannot be duplicated. Little did I know that Salmagundi would eventually become part of my world.

About thirty years later, I was invited to become a member through connections from my current career. Through my business, Artful Circle, which I own with my business partner, Franklin Hill Perrell, we offer guided visits to art galleries and museums, lectures and curatorial services. We get to see artists at work in their studios, gallery exhibitions all over the city and even guest curate museum exhibitions. I am forever inspired by the art I see around me, but Salmagundi Club has its unique charm that consistently pulls me in. 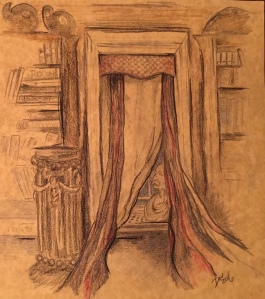 Walking up those stairs up to the club entrance and knowing that I could be a part of it was one of the most exciting moments of my life. I held onto that application for over a year out of my own sense of insecurity. I finally faced my fear and submitted my application and portfolio. I felt an instant warmth with the admissions committee and my confidence blossomed. Once accepted as a Resident Artist Member, I took full advantage of the benefits of membership. I have served on several committees, including Programming, Library and Public Relations. I’ve worked with dedicated member volunteers and staff on a variety of projects, including presenting art lectures myself! I am proud to have had my photographs on display at various shows, including the historic Black and White exhibition. By being involved with the club’s leadership, I’ve gained a special insight into what the Salmagundi Club stands for and why it is important to continue the legacy.

Salmagundi is my go-to spot when I need a place to socialize or do business in the city. When I bring friends, family or business associates to visit Salmagundi, people are in awe. The building itself is a classic beauty with art history oozing from every inch. It is hard not to feel transported in time as you tour the club. This artistic haven is the perfect antidote to the fast-paced world outside. I really do think that every time I walk into the club!

The library is my favorite spot and I have spent many hours perusing the books, working on projects, attending meetings and even taking a little nap on their comfy couch. I am particularly fascinated with their prized palette collection, which has been documented by my friend, art conservator and fellow Salmagundian Alexander Katlan.

It’s not just the architecture that draws you in. It is the people. Salmagundi is not a stuffy, formal place. Its members are artists who want to truly want to share their ideas, work together and inspire each other. They are dedicated to bringing old world values into today’s marketplace. They feel their favored traditional style of art will always be a valued part of any art collection and work hard to promote their art through gallery exhibitions and auctions.

With legendary artists such as Thomas Moran, Louis Comfort Tiffany, William Merritt Chase, N.C. Wyeth, Augustus Saint Gaudens, Child Hassam, Norman Rockwell, Lumen Martin Winter and even honorary member Winston Churchill, it is clear that Salmagundi has an impressive membership roster over a century old. Now, the club boasts a new circle of artists to the club, including Guy Wiggins, Christopher Zhang, Claudia Seymour, Gary Erbe, Leah Lopez, Christine D’Addarrio, Alan Richards, and Everett Raymond Kinstler. I have made lots of friends and business associates through the club. Networking in any business is difficult, but there is an instant connection between Salmagundians. Through their affiliate relationships with other societies, such as National Arts Club and Society of Illustrators in New York City as well as other cities and countries, Salmagundi membership reaches far beyond the walls of their Fifth Avenue home. It’s a worldwide network of artists and art-lovers.

The club have successfully kept up with the times, going from a mens-only club to admitting women since the 1960’s. In fact, many women have held leadership roles, including two female presidents. Salmagundi has also updated their membership categories to suit today’s creative fields by adding photography, graphics, architecture, engraving, mixed media to the standard painting and sculpture disciplines. Even though our society is in the midst of a technology revolution, Salmagundi has one foot grounded firmly in its traditions and history with an eye for contemporary ideals – a very appealing point of view for the professional artists of today.

In this centennial year of the club, I feel a bond with the history of this place – for its past, present and future. Although Salmagundi is housed in a landmark building, its members are determined to grow and prosper long past their centennial celebration this year. With plans for major building renovations and to increase membership, the sky is the limit – and with Salmagundi artists at the helm, you can be sure the sky will be painted beautifully!