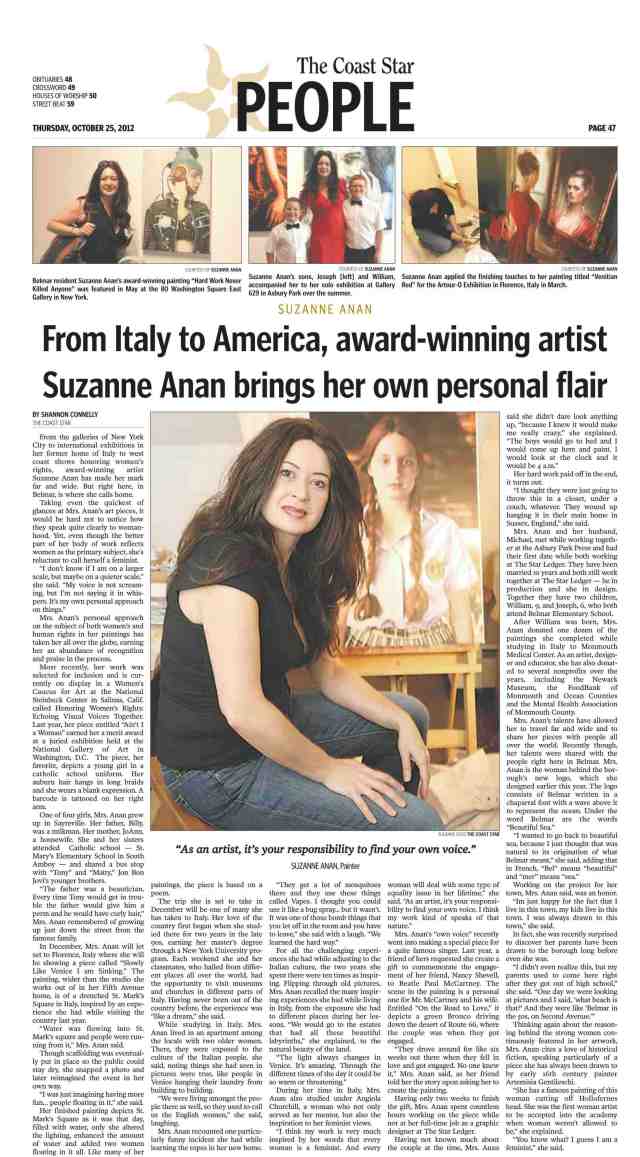 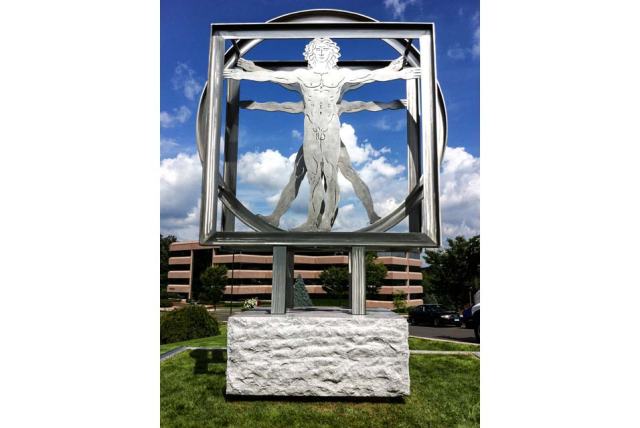 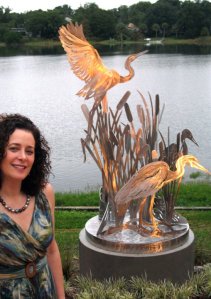 Babette utilizes laser and water-cutting technology to create her heavy-gauge stainless steel sculptures which can be seen throughout the United States and Europe. This particular project took six years from conceptualization to completion.

“This has been a wonderful milestone project, so of course I wanted to share it with all of you! Working on historical projects and actualizing my drawings into stainless steel sculptures has been incredibly exciting and gratifying.

“This commission dates back to 2006. Creating my sculptural interpretation of Leonardo’s Vitruvian Man drawing has been a dream project combining my love of engineering and art while exploring Leonardo da Vinci’s multi-faceted brilliance.” 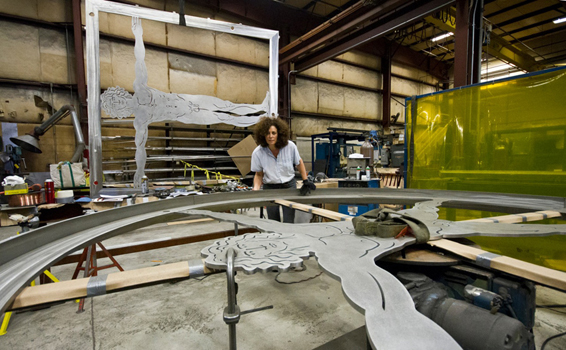 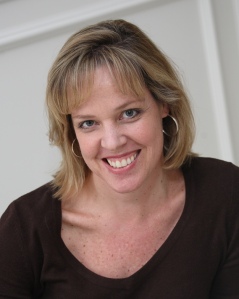 Jeanne Rosier Smith (NRA-2012) of Sudbury, Massachusetts, won the Prix de Pastel (top prize) in the International Association of Pastel Societies twentieth juried exhibition. This year, the show is being held in the city of Brea, California and runs through September 14th.

“The winning painting is one in a series of waves I’ve been working on for the past three years. They just got more interesting to me — the movement, power and light — the possibilities for abstraction and yet absolute realism. There’s something also about capturing an illusion of splash and foam with a completely dry medium that appeals to me.” 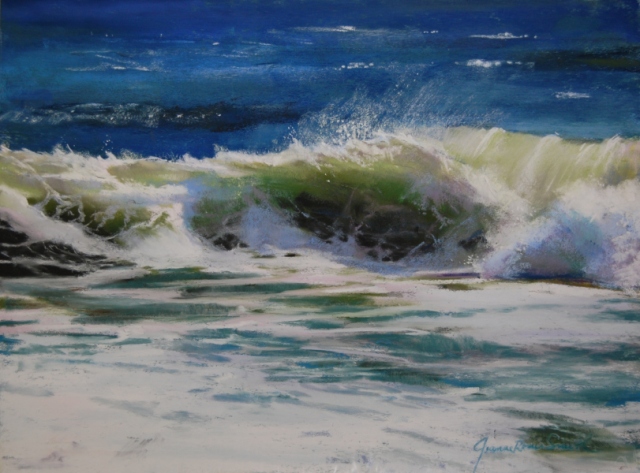 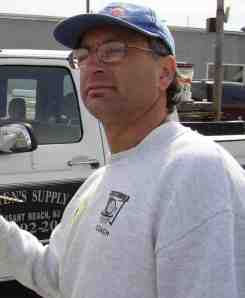 Michael Budden (NRA-1999) of Chesterfield, NJ won top prize in the national Laumeister Competition, sponsored by the Bennington Center for the Arts in Bennington, VT. Artists from around the country competed for a first prize of $4000.00. Nationally acclaimed artist / juror Scott Christensen from Idaho first narrowed the submissions down to 53 accepted works, after which he picked the top three prize winners and several honorable mentions.

“I knew about this competition because a friend of mine won it in the past and this is the first time I entered it. Low and behold, I won top prize. Amazing. I have been experimenting with this foggy evening theme of the Brooklyn Bridge and thought it might work for me. I have had both positive and not so positive response to the image from my artists friends but I stuck with my gut feeling that it is a viable image for me. I’m thrilled that the Bennington Center for the Arts is sponsoring this competition. They treat artists with the upmost care and professionalism and Im also happy Scott liked the image also.” 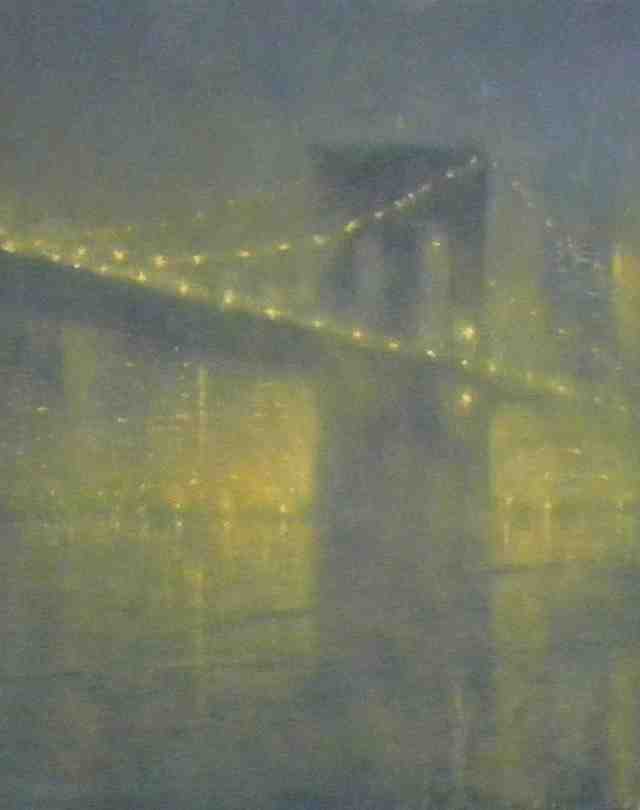 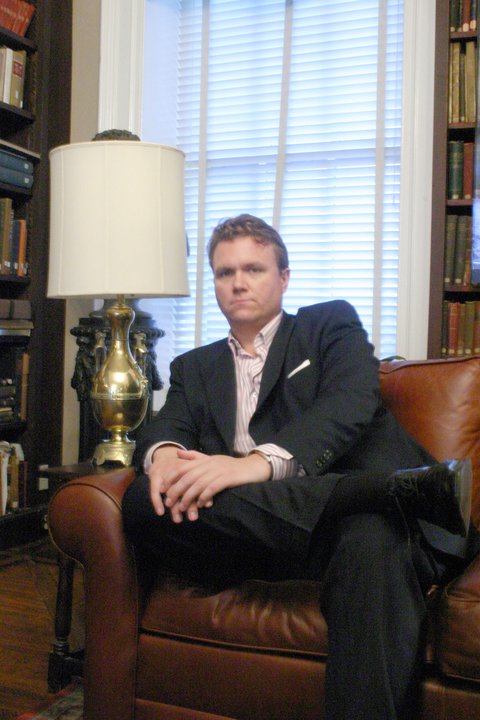 “Strength is what appeals mostly to me in art. The work can be any medium, style, subject or size, however in the end the work must have power.”

While working on staff as an illustrator at Lowe, a large advertising agency, David was introduced to the Salmagundi Club by fellow illustrator, Bill Angresano. After a long day of drawing at the agency, they would head to SCNY for more drawing, often attending Louis DeDonato’s Life Drawing sessions on Thursday nights. Falling in love with the history, ambiance and artistic camaraderie of Salmagundi, David applied for and was elected a Scholarship member in 1997.

Fast forward to 2012 and David is currently serving on the Board of Directors as Treasurer and Education Chairman. Previously he’s held office as Third Vice President, Chairman of the Public Relations Committee and Co-chair of the Junior/Scholarship Committee. If that weren’t enough, David has also taken the helm of the Saturday morning class where he teaches painting and drawing.

David’s mother Laurel, also an artist, became equally enamored of the Club, joining as a Resident Artist in 1999.

David holds a Bachelor of Fine Arts from the School of Visual Arts and earned his Masters Degree in Arts and Cultural Management at Pratt Institute. He is an Executive member of the Society of Illustrators, serving as Membership Chairman, Special Events Chairman and Treasurer. 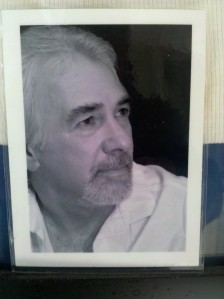 “My work is a journal, similar to Addison and Steele’s Tatler and The Spectator periodicals of the early 1700s. The viewpoint taken in these paintings serves as the work’s ‘subplot.’ The intricacies of these works, including such details as brush stroke, color and composition, create a sense of time and space.

“I draw inspiration for these works from the early 1900s American painters, such as Walter Farndon, Emile Gruppe, Frederick Mulhaupt, Antonio Cirino and a host of North Shore painters.

“The paintings are completed outdoors, in plein air, while the touch up and varnishing are done in the studio. The sculpture is done in the studio with or without a live model and from research or anatomical studies.”

Amongst entries in countless SCNY shows, Montella participated in the historic October 2011 Exchange of Exhibitions with sister club Arti Et Amicitiae in Amsterdam. In addition to Salmagundi, Billy has memberships at the Providence Art Club, National Arts Club and Connecticut Academy of Fine Arts.